Heavy duty construction with all fixings and instructions included, no drilling required.

For bikes with aftermarket exhausts please contact us first before purchasing.

The parts came quickly, unfortunately the instructions weren't that clear but from the pictures and a couple of e mails with the help desk, deduced not all of the washers for the spring mounting bolt were present (can I suggest you perhaps include a simple parts list, similar to ones in flat packed furniture with the quantities of each? I had to step the spring mount out using an additional M8 nut as a lock nut so it clears the head of the RH SKT Button Head (not a major job). I also found the stand would bind, so followed the process of fitting an extra washer between the frame to act as a spacer. This worked but then the M10 x 35 bolts supplied didn't engage fully into the Nyloc nut, so ended up buying longer M10 x 40 stainless bolts & nuts from a local tool supplier. The main issue is it's much harder to put the bike on the stand than shown in the u tube video using a Street Twin. I'm 5'7" and 12 stone and the bike is 200 + KG so this was a struggle. I've resorted to pushing the bike onto a piece of 6"x1" plank placed in front of the rear wheel. This raises the bike up an inch which is enough to allow the stand to touch the floor straighter and now it requires almost no effort to roll the bike back. I can't fault the support from the help desk and having a centre stand does make working on the rear wheel a lot easier. This wouldn't put me off using Tec Bike Parts again. Thanks

Instructions not clear. Bolt assembly for the spring not as per the picture. Main bolts don’t go on completely without the stand sticking. Tried the suggested cure to stop it sticking, it didn’t work. When the stand is down the wheels don’t leave the ground making it a little unstable. I bought this to make it easier to turn the back wheel when cleaning. Very disappointed. Another small detail, why put a red plastic cover on the spring when the rest is black? 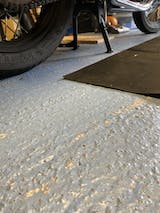 I ordered a Bonneville stand kit from TEC Bike Parts. It arrived very fast and in perfect condition. I also needed a console to this stand kit and TEC willingly sent it in the same package. I want to say thank you and I heartily recommend TEC Bike Parts to everyone.

Easy to assemble and works perfectly